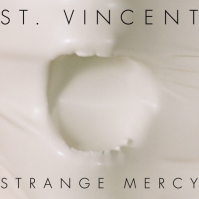 With the critical mass now in her favour, a commercial breakthrough seems inevitable for St. Vincent, known otherwise as Annie Clark: poster girl for indie rock, former member of Sufjan Stevensâ€™ touring band, beloved of Bon Iver, Grizzly Bear and Andrew Bird. Her two previous albums have revealed an intelligent, offbeat but charming talent, and her live performances â€“ both with a band and solo, surrounded by loops stations and echo boxes â€“ have proven her an impressive musician. Furthermore, her feminine side is matched by an ability to play the boys at their own game â€“ her recent virtuoso live cover of Big Blackâ€™s Kerosene sees her shred as effectively as anyone â€“ rendering redundant lazy comparisons with the traditional canon of female performers.