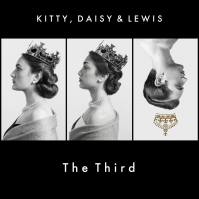 Kitty, Daisy And Lewis The Third

Having sold over a quarter of a million albums worldwide and sold out headline tours, London siblings Kitty Daisy & Lewis return with their new album, Kitty, Daisy & Lewis The Third. Produced by Mick Jones of The Clash in a new 16 track analogue studio in a derelict Indian restaurant in Camden Town, the band take their third album to another level, with the songwriting, instrumentation, styles, production and sound.

With three different writers and multi-instrumentalists in the band, their songs are an eclectic mix up of Pop, R’n'B & Blues, Psychedelic Rock, Soul, Country, Jazz and Ska. Embracing a spread of influences from blues to disco, but always sounding unmistakably Kitty Daisy & Lewis, the stories in this album resonate with moods and melodies that touch you in ways that are both uplifting and unnerving.