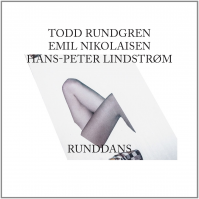 Runddans is the result of the collaboration between Todd Rundgren, Hans-Peter Lindstrom and Emil Nikolaisen. It’s a spiritual magnusopus, that stands alongside Rundgren's most worshipped trippy albums of the seventies, fusing his blue eyed soul with Lindstrom’s disco epics and Emil Nikolaisen’s studio trickery into a cosmic mix of soul, synth, pop and disco.

The collaboration was born after Rundgren did a stomping remix of Lindstrom's track «Quiet Place To Live» in 2012 (Rundgren’s first ever remix). The three of them met in a studio in wintery Oslo that same year, and the music slowly mushroomed from there. Ideas grew and took u-turns that lead into a violently beautiful and strange creature. The highly detailed and cacophonous sound of the album clearly conveys the international feel characteristic of Rundgren's cutting edge soul of his most studio-driven epic, 1973's A Wizard A True Star as well as his classics Todd and Initiation. The synthesizers, the restlessness, the suites, the sonic antics, the search for understanding, fulfilment and good times: it’s all here. It also references his lost classic, the massively spiritual voice-only album A capella from 1985. This, combined with Lindstrom’s signature extended cosmic compositions and Emil’s psychedelic sound-quilting, paint the picture of three individuals on a journey towards musical bliss.