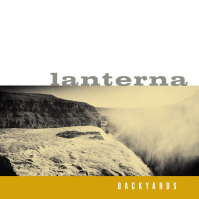 Independent Project Records is pleased to announce a vinyl edition of Backyards, the beautiful new album from Champaign, Illinois Lanterna. On the ten-song collection multi-instrumentalist Henry Frayne crafts landscape of warm, instrumental tapestries. Backyards is the fifth Lanterna album to be released by Badman / Jemez Mountain, and the first of them to be released on vinyl. For Frayne, the inception of Backyards began almost a decade ago and is a culmination of his career as a versatile musician best known for blending genres and guitar styles to create layers of airy overtones. Frayne composed the underlying textures of the record with a heavy influence from the Nashville tuning the practice of utilizing very light strings to produce an angelic sound. Frayne learned the technique from bandmate Brendan Gamble during their time in The Moon Seven Times.