Records of the Week (from 14th May) 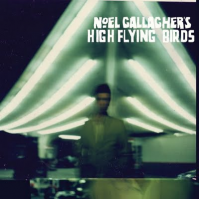 The highly anticipated first solo album from Noel, and he's got his confidence back. After years of watered-down Oasis albums, where anyone with a band membership and a silk scarf could throw an authentically scuffed tune into the pot, this is not a tentative recovery, nor does it bluster and huff. It rests on a bed of quiet authority, that sense of calm over turmoil, which comes from Noel’s mournfully bullish voice. Or to put it another way, this is the sound of a man who no longer has to give a stuff what the rest of the band thinks.

You can divide the songs into three categories: one, the jazzy shufflers – Dream On, The Death of You and Me, Soldier Boys and Jesus Freaks. Two, the Oasis throwbacks – If I Had a Gun, AKA… Broken Arrow, (Stranded On) The Wrong Beach. And three, the big rock anthems – Everybody’s on the Run, (I Wanna Live in a Dream in My) Record Machine, Stop the Clocks. The exception is AKA… What a Life, which takes Noel out of his traditional comfort zone and into a disco, albeit a very lean and spartan sort of disco. It suits him well, and he knows it.