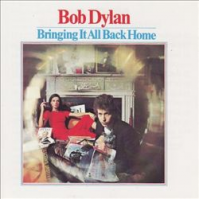 Bringing It All Back Home

"You sound like you're having a good old time," a purist Dylan fan is spotted telling the artist in the documentary Don't Look Back just after the release of this, his first (half-) electric album. He certainly does. Updating Chicago blues forms with hilarious, tough lyrics--in fact, all but stealing the meter of Chuck Berry's "Too Much Monkey Business" for "Subterranean Homesick Blues"--on one side, dropping some of his most devastating solo acoustic science ("It's All Over Now, Baby Blue", "Mr Tambourine Man") on the other, the first of Dylan's two 1965 long-players broke it right down with style, substance and elegance.