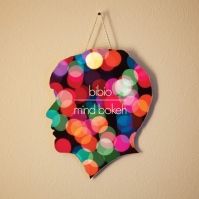 Bibio's Stephen Wilkinson had such a major breakthrough with Ambivalence Avenue that anticipation about whether or not he could maintain such a breakneck pace of innovation was palpable. Mind Bokeh — whose title was inspired by the photography term for the way a lens renders out-of-focus points of light — is true to its name and Wilkinson’s hyperactive creativity, but not in obvious ways. Though the title track dapples sparkling electronics over a luminous haze of distant nature samples, the rest of the album isn’t exactly blurry. In fact, its sounds are often surprisingly hard-edged and chilly, especially compared to Ambivalence Avenue’s summery vibe. Yet Wilkinson's meticulous way of layering these crisp, immediate sounds with half-heard atmospheres is fascinating (especially under headphones), suggesting the intertwining of the present with dreams and memories, and the external world with the internal one. At times it feels like Wilkinson buries his melodic gifts in favor of rhythm and texture, but “Pretentious,” which begins with a prickly, atonal intro before settling into moody electro-soul, proves his pop instincts can’t be hidden for long. While the soul-jazz that colored Ambivalence Avenue is still here — particularly on the album’s first half and the lovely “Light Sleep” — other elements are at play here, such as the squelchy acid techno bassline on “Wake Up!” or “Artists’ Valley”'s further evolution of Bibio's original folktronica sound. Because Mind Bokeh's first half crystallizes Ambivalence Avenue's soul, glitch, and pop into a more cohesive sound, at first it doesn’t sound quite as impressive as that album was. A large part of Ambivalence Avenue's appeal was not knowing what was coming around the corner; however, just when Mind Bokeh's approach seems clear, Wilkinson changes tack with “K Is for Kelson,” a joyous, irrepressible pied piper of a song, and “Take Off Your Shirt,” which mixes strutting guitars with lyrics that turn a night out into poetry: “All the girls in town gonna dress the place in blue eyed green eyed brown eyed light/All the boys with the desire of night/Gonna lose their feet gonna lose their mind.” Mind Bokeh's songwriting may be its biggest, yet subtlest leap forward; “Feminine Eye” captures intimacy and distance in lines like “tapping your foot to my favorite tracks leaking from my headphone backs.” Wilkinson also sounds more confessional than he has in some time, with the churning urgency of “Excuses” and “More Excuses” pulling the album out of its reveries. Mind Bokeh is a masterful, thoughtful album, and even if it’s not quite the dazzling leap Bibio made before, its subtler gifts are just as rewarding.