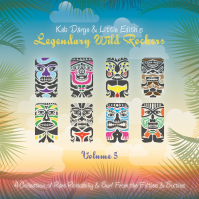 There’s not too much to say about this, the 5th volume of Keb Darge & Little Edith’s Legendary Wild Rockers that you won’t know already: it’s the final instalment of an acclaimed series that picks up where vol. 1-4 left off, with more raw, rootsy rockabilly and surf sounds, many rare as the proverbial hen’s teeth.

An infamous part of Britain’s club culture since the heyday of the Northern scene in the 1970s when he first gained a reputation for the rugged physicality and athleticism of his dancing, Keb made the transition to DJ with his legendary residency at Stafford’s Top Of The World club at the beginning of the ‘80s, where he became known for breaking ‘newies’ at a time the scene was wallowing in nostalgia.

That set a pattern for Keb, always pushing against the grain. At the end of the decade he relocated to London and established himself as a funk DJ with a residency at Soho’s famous Wag Club, while the rest of the capital was basking in the second and third summer of love. From that came the Deep Funk night at Ormond’s with Snowboy and then, with a compilation on the same theme, began his long association with us.

Keb’s Deep Funk compilations really brought him international attention and a globetrotting DJ career. But never one to rest on his laurels, Keb has shown a propensity to start a new scene whenever he gets a bit bored with the one everybody else is just catching up with! He went back to the roots of soul playing vintage R&B, and then, in a step that was really quite radical for a soulboy, the rockabilly and early surf music discoveries that have made up this latest compilation series.