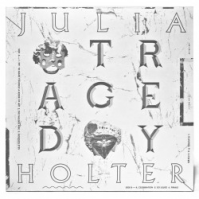 Night School is honoured to release Julia Holter's avant-pop masterpiece 'Tragedy' on CD. Originally released on lp only via Leaving Records towards the end of 2011, Holter's first full-length proper picked up plaudit after plaudit, topping best of polls universally. Unknown to most critics and listeners was the fact that this version of 'Tragedy,' as lush and cinematic as it was, was an abridged version. This will be the first time Julia Holter's vision will be realised to the full. 'Tragedy' showcases Holter's exploration of different sonic textures and compositional techniques, elements which she evolves into achingly beautiful pop songs. These songs form a suite based on the ancient greek play 'Hippolytus,' a narrative that reveals itself slowly over the duration of the album but that does not detract from the universal beauty of the compositions. Eroded opera and field samples, sweeping synthesisers and mediative structures frame each song - giving it breathing space and allowing each nuance to fully captivate - while, above all, Julia Holter's effortless, heartfelt voice crystallises each moment perfectly. The CD version of 'Tragedy' features extended tracks, interludes missed out from the LP and a fuller representation of Holter's original intentions."