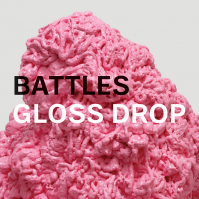 *** Please note the Rise Record Club version of this album which comes with an exclusive, limited 7''***

Battles releases their second album proper (third if you count the E.P compilation) & first since the departure of vocalist & guitarist Tyondai Braxton. To fill the hole vacated by Tyondai, we hear guest vocals from Kompakt producer Matias Aguayo who features on lead single â€˜Ice Creamâ€™, Gary Numan, Yamantaka Eye (Boredoms) & Kazu Makino of Blonde Redhead. The album has a much more playful sound than one might imagine considering the fact that the band themselves have described the recording period as â€˜darkâ€™. Despite this â€˜playfulnessâ€™ the album is full of complex & challenging as one might expect of three guys who played in numerous math-rock bands of the 90s. The performance & production on the album really do showcase a band at the top of the game. The overwhelming feeling that I get from â€˜Gloss Dropâ€™ is not the disappointment of a band member leaving but of the new found possibilities to produce their best work to date.