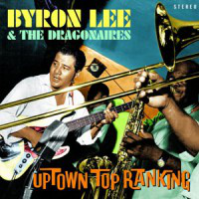 VP Records will release Byron Lee & The Dragonaires’ Uptown Top Ranking, a collection (available together for the first time) of 20 classics from the legendary Jamaican band. The group mastered multiple musical genres – including ska, rocksteady, soca and calypso – and played a key role in expanding its presence beyond the Caribbean. Culled from the extensive Dynamic Sounds catalogue, the selection demonstrates why Byron Lee was one of the most influential Caribbean recording artists for over 50 years. The songs, which are mostly rare gems and classic hits ranging in style and decade, are perfect for collectors of reggae, vinyl and oldies.

The CD component will be accompanied by a double vinyl in gatefold packaging to celebrate the vitality of the LP format as well as these recordings. Filled with testimonials from the Byron’s widow Sheila Lee, Dragonaries’ band members and fellow artists like Bunny “Striker” Lee, the album has extensive liner notes documenting the band’s historical and significant importance in Caribbean music.

Byron Lee and the Dragonaires played a crucial pioneering role in bringing Caribbean music to the world. Originally formed in 1950, the band got their start performing at the island’s local hotels, also incorporating American pop and R&B covers in their repertoire. The band appealed to the uptown “middle class” crowd of Kingston, Jamaica and tourists visiting the area. In the early 1960s, they were one of the first major ska bands to break on an international level – landing a onscreen performance role in the first James Bond film Dr. No. In 1964, they received another boost when they were selected by the former Jamaican Prime Minister Edward Seaga (then the island’s head of Social Welfare and Economic Development) to perform as a backing band for a showcase of Jamaican talent (including Jimmy Cliff, Prince Buster, and Millie Smalls) at the New York World’s Fair.