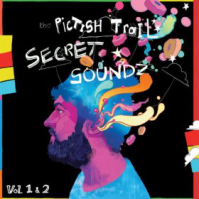 *Comes with limited bonus disc for all pre-orders*

Johnny Lynch, aka The Pictish Trail, is something of a conundrum. On first impressions, heâ€™s a self-deprecating hairy hobo whose on-stage banter could give many comedians a run for their money. But once he begins to sing, Lynchâ€™s extraordinary vocals reveal hidden depths that can subdue the most rowdy of audiences into a blissfully hypnotised silence.

Having recently signed to Moshi Moshi Records, Lynch is pleased to announce that his gloriously eclectic and critically acclaimed albums Secret Soundz Volumes 1 & 2 will be getting a full release on June 9th. The double album will be available on limited gatefold 12â€ vinyl and gatefold CD.

Lynchâ€™s eloquent songs are as wildly varied as his selection of brightly coloured bobble hats. His distinctive voice has been accompanied by everything from acoustic guitar to a full-on four piece metal band to throbbing dance beats and samples, and often during the course of the same gig.