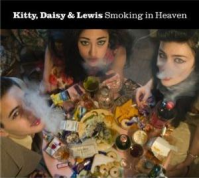 Highly talented sibling trio follow up their hugely successful debut album with a brand new longplayer 'Smoking In Heaven. While the band's influences are firmly rooted in the past, the forthcoming album hurtles towards an interminable future with songs that boast stylings of R&B, soul, ska, pop and jazz, adding another dimension to their unique style and sound.
The album consists entirely of original material written by the band and recorded/produced by the band on entirely vintage analogue equipment in their home studio.
Since their debut album the band have toured the US, Australia, Japan and Europe with headline shows as well as supporting Coldplay, Jools Holland, Razorlight and Richard Hawley among others.