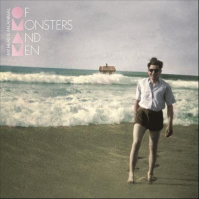 My Head Is An Animal

Iceland: a tiny island nation of roughly 320,000 people. It has no standing army. It is at the mercy of the hundreds of active and inactive volcanoes that lie below its geothermally unstable surface. Despite no major industries (other than fishing), Iceland remained one of the wealthiest nations of the burgeoning European Union. To add to this miniscule nation's exotic appeal, it has produced two of the most consistently excellent and ambitious artists of the 90s and 2000s, IDM siren Bjork and post-rock/ambient icons Sigur Ros. Well, we can finally add another band to the list of astonishingly talented acts to emerge from the volcanoes and fjords of Iceland, six person folk pop act Of Monsters and Men, whose debut album My Head Is An Animal marks the band as a force to be reckoned with.

Of Monsters and Men rose to prominence after winning the 2010 Musiktilraunir, which is Iceland's national battle of the bands-esque competition. Before long, this led to a major label signing, Universal, before they had even released their first real album. The band is that good, and if you were worried that a major label debut from a mostly anonymous band stateside would lead to a sloppy and amateurish premiere, you can rest those worries aside. My Head Is an Animal joins Cults' self-titled debut as an album that will instantly shoot Of Monsters and Men to the top of everyone's watercooler music conversation. With a sound that can only be described as Arcade Fire's more folk-oriented younger brother, Of Monsters and Men craft their own musical soundscapes to create an album experience that is as familiar as it is unknown.