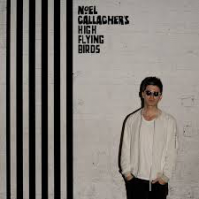 Noel Gallagher is back!

Johnny Marr performs on the closing track, which will be the second single from the album. "He's a very enthusiastic artist and I tried to get him to play on 'What A Life', Gallagher said. "He's a truly great guitarist and he has something that nobody else has. He's amazing, a top man."

Confirming details of 'Chasing Yesterday', Gallagher said: "I've never been involved in two successful albums in a row. After '…Morning Glory?', we [Oasis] blew the one after that."

The album was self-produced after Gallagher's regular producer, Dave Sardy, was unavailable to work on the record. "I enjoyed the freedom of it but not the responsibility," Noel said. "I'm used to asking people, 'What are we doing today?' and then people were asking me that question. I finished it the day after the World Cup final. I finished it early, I've been sitting on it a while, it's been burning a hole in my pocket."