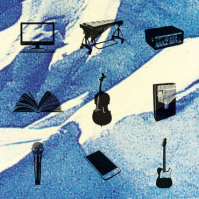 Listen With(out) Piano features new versions by artists including Papa M (David Pajo), Green Gartside (Scritti Politti), Spring Heel Jack, Beatrice Dillon, Brian DeGraw (Gang Gang Dance), which can be played on their own, or at the same time as the songs on Piano, to create a brand new listening experience. The album features the work of eleven of Alexis’s favourite musicians, handpicked to create new tracks designed to work in response to the songs on Piano, the third solo album by the Hot Chip frontman. Though the record can be synched with the original Piano recordings by playing both albums on two devices simultaneously, the tracks on Listen With(out) Piano can be also be enjoyed as original songs on their own merits. “My brief was both very wide open and very specific, and part of the pleasure for me, and now hopefully for the listeners, is to see how everyone responded so differently to the task,” Alexis explains. “The results are truly amazing, and here you have a new album that works both as a kind of electro-acoustic ambient companion piece to Piano, and as a series of musical clothes to be put onto the deliberately bare record I released.” Piano, recorded at Hackney Road Studios by Shuta Shinoda, was released in June 2016 by Moshi Moshi. An intimate collection of songs comprised entirely of Alexis’s vocal and piano, the record was captured live to preserve each intricacy.