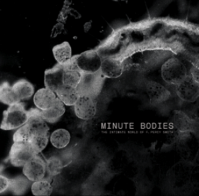 Minute Bodies - The Intimate World of F. Percy Smith, directed by Stuart Staples of Tindersticks, was first screened at the 60th BFI London Film Festival in October 2016. It is a meditative and immersive film tribute to the astonishing work and achievements of the early twentieth century naturalist, inventor and pioneering filmmaker F. Percy Smith. Minute Bodies is an interpretative edit that combines Smith's original footage with a new contemporary score by Tindersticks, with Thomas Belhom and Christine Ott, to create a hypnotic, alien yet familiar dreamscape that connects us to the sense of wonder Smith must have felt as he peered through his own lenses to see these micro-worlds for the first time. The forming of the edit and its musical score evolved over a three year period. The music was created from a loose collective of invited musicians. With tindersticks at its heart it also greatly benefits from the involvement of Thomas Belhom (percussion) and Christine Ott (Ondes Martenot and piano). There are also cameos from David Coulter (Musical saw and Nose flute) and Julian Siegel (Saxophone). It was recorded and mixed at the bands studio in France.