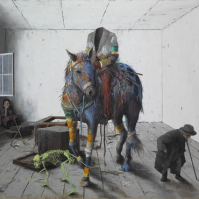 Songs for the Def

After a rollercoaster twenty-five year career as an artist, curator and tastemaker, James Lavelle returns with Unkle’s fifth studio album: The Road. In the twenty years since Unkle’s debut, Lavelle has been prolific. He created three studio albums with Unkle (Never Never Land, War Stories and Where Did The Night Fall), a host of critically acclaimed film scores, and curated a series of art exhibitions through Daydreaming with... most notably, the hugely successful DayDreaming with Stanley Kubrick exhibition at Somerset house. After a productive trip to the States, Lavelle returned to London to add the finishing touches to what was shaping up to be another classic Unkle record. Lavelle then managed to conclude a twenty year conversation with Primal Scream’s Andrew Innes, as the pair finally got together in the studio. Innes plays lead guitar to the album’s title track The Road. Another first for Lavelle was a collaboration with Planet Funk’s Gigi Canu and Marko Baroni, who along with Duke Spirit starlet Liela Moss, contributed to Sunrise (Always comes around), Unkle’s reinterpretation of the summer anthem.