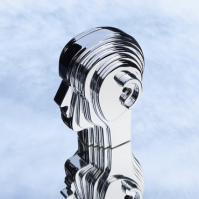 A brand new Soulwax album!! After a period of extensive rehearsals and a level of planning to befit such a huge feat, From Deewee was recorded with the full touring band in one take at the Dewaele brother’s Deewee Studio in Ghent, Belgium on February 7, 2017. Based on the Transient Program For Drums and Machinery which began touring in the summer of 2016, they set out to record these songs live with the exact same setup, machines and musicians as they had on the road. Playing on this record are Stephen and David Dewaele, Stefaan Van Leuven, Iggor Cavalera, Victoria Smith, Blake Davies and Laima Leyton. The instruments used are two Staccato drumkits, one clear crystalline Meazzi Wooding drumkit, one set of Rototoms, various Hofner bass guitars, a Macbeth M5n, an Oberheim Two-Voice Pro, a Two Thousand Six Hundred copy built by The Human Comparator, one Oberheim OB-Mx, an EMS Synthi AKS, an Arp Odyssey, a TB-303 clone, a Mellotron M4000D, a Sequential Prophet 6, a Waldorf Streichfett, a Burns Sonic guitar, a Vox Phantom guitar, one Syncussion clone built by Loudestwarning, various solid state Roland, Peavey and Acoustic amplifiers and a wide range of effects, all going through three Trident Fleximix consoles, straight into Pro Tools.
Since the creation of Soulwax in 1995, David and Stephen Dewaele have consistently pushed the boundaries into new and innovative territory. In addition to Soulwax, the brothers continue to tour the globe as 2manydjs, have their Deewee record label and studio, Radio Soulwax – a visual radio station and app, the Despacio project with James Murphy and their 2 x 2 radio show on Beats 1. Not to mention producing some of the most cutting edge remixes we’ve seen in recent times for the likes of Warpaint, Tame Impala, Metronomy, Arcade Fire, Daft Punk, Gossip, Hot Chip, MGMT, and many more.