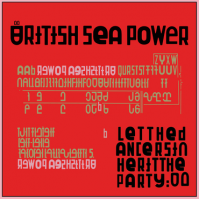 Let The Dancers Inherit The Party

International treasures British Sea Power release their first new material in four years. Melodic, direct and brimming with emotional urgency, it’s an album where rock muscularity joins inseparably with pop immediacy like a crate of the finest sparkling wine exploding inside a Marshall stack. The first track from the album - Bad Bohemian – is an invigorating pulse of modernist rock music that’s been added straight to the 6Music playlist. Across their entire history, British Sea Power have taken a broad and panoramic perspective that’s drawn on historical events while mirroring the ageless wonders of the natural world. Let The Dancers Inherit The Party’s twelve songs cover subject matters ranging from the stars in the night sky to the methodology of media manipulation. Both consistently contemporary and consistent in mood, the album alludes to a world full of chaos and disorder whilst seeking to answer that world with optimism and hope. Recorded in Sussex, London and on the Isle of Skye, it follows the band’s five studio albums for the great Rough Trade Records – a catalogue of releases that saw British Sea Power become the longest continually-signed band in the label’s history. Let The Dancers Inherit The Party sees the band return to the kind of exhilarating and bright-minded guitar music that has seen them nominated for the Mercury Music Prize and which has drawn praise from David Bowie, Lou Reed and the National Maritime Museum, alongside Doctor Who, Harry Potter and Sherlock Holmes (Peter Capaldi, Daniel Radcliffe and Benedict Cumberbatch have all declared an interest in the band).
Let The Dancers Inherit The Party‘s sleeve features typography influenced by the German Dadaist artist Kurt Schwitters, whose work British Sea Power’s two vocalists, Yan and Hamilton Wilkinson, discovered while growing up on the edge of the English Lake District. Schwitters fled Nazi Germany in the 1930s and ended up living in the Lakes, where examples of his work now reside, including at Abbot Hall Gallery in Kendal. British Sea Power have long used Schwitters’ sound-poetry recordings in their live shows and, in 2013, Yan created a Schwitters soundscape for Tate Britain. The Schwitters link hints at their on going fondness for continental Europe.