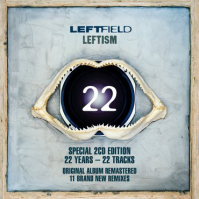 Leftfield - one of electronic music's all-time greatest acts release Leftism 22, a very special reissue of their seminal debut album.Leftfield was formed in 1989, before emerging publicly in 1990 with Not Forgotten, a song that established a template for a new strain of British house leaning away from American styles dominating UK clubs. Released in January 1995, their debut album Leftism remains one of the defining statements of dance music, a gloriously inter-woven bombardment of musical styles and immaculate grooves, nominated for a Mercury prize and later voted in the top ten greatest albums of all time by readers of Q magazine. The album spawned numerous hit singles in Open Up - their now legendary collaboration with John Lydon; Original, featuring Curve’s Toni Halliday; Release the Pressure, featuring Earl Sixteen; and Afro-Left, with vocals by Neil Cole, aka Djum Djum. Leftism 22 arrives 22 years on from the release of the acclaimed original, in a remastered version overseen by Neil Barnes and Paul Daley.