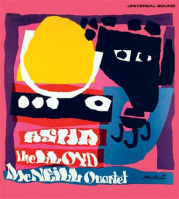 Soul Jazz reissue this super-rare deep jazz album from the Lloyd McNeill Quartet. This album was originally released by flute player Lloyd McNeill on his own private-press Asha Recording Company in Washington, DC in 1969 (30 years ago!) and only 1000 copies were ever pressed and Asha has been a serious collector’s deep jazz album ever since. African-American flute player Lloyd McNeill’s self-distributed record label ran from 1968 – 73. Lloyd McNeill is a multidisciplinary artist – a painter who lived in Paris in 1965 and was a friend of Picasso, a musician who has worked with Nina Simone, Nana Vasconceles, Ron Carter, Cecil McBee and many more and a music anthropologist, poet and teacher. In the 1960s he was involved in the civil-rights movement and produced music for ballet, paintings and installations. His music mixes jazz with Latin, Brazilian and African rhythms that McNeill learnt was studying anthropology in his travels through much of Africa and Brazil (where he joined with Dom Salvador, Paulinho da Viola, Paulo Maura and Martinho da Vila).