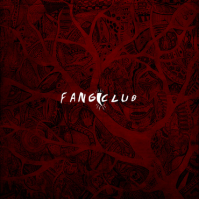 Raw, direct, powerful, alt-rock, written with no frills and played with pure passion - the kind of energy that can only come from three old friends with sheer determination and “no plan B”. Meet Fangclub - a Dublin-based trio who formed in the neighbouring, remote coastal town of Rush when they were teenagers. Between dropping out of college for those early jam sessions and now, they’ve signed with major Universal imprint Vertigo Records, released two acclaimed EPs, toured with the likes of Twin Atlantic and won over a dedicated legion of fans. Formed of singer and guitarist Steven King, drummer Dara Coleman and bassist Kevin Keane, Fangclub have been lauded by Kerrang for their “explosively catchy tunes”, while Punktastic have deemed them “destined for mainstream success”. With their self-titled debut album due in August and a packed summer of touring, this is one club that’s only going to grow and grow in strength and number. Openers Bullet Head and Role Models kickstart the thread of noise driven by melody, with the break-neck desert-rock ferocity of Queens Of The Stone Age met by the inescapable hooks of Weezer. Lightning and Dreamcatcher take the paranoid math-rock that Biffy Clyro chase and pack it with a Seattle-sized chorus - culminating in tracks like the feral rush of Common Ground and the pure grunge nihilism of Best Fake Friends that destine this band for arenas. The Fangclub sound may be huge, but their attitude and manifesto remain ultimately human. The brimstone of Bad Words and Loner simmer all the more with King’s lyrics riddled with self-doubt and boredom, speaking for a generation that could do anything, if only they had something to do. He bares his soul throughout the record, never more so than on the yearning vulnerability of Animal Skin - that timeless tale of a relationship “bleeding me out, letting you in.” Their first proper blockbuster is just around the corner. Recorded and mixed by the band themselves and friend Tadhg Healy to give a true, 100% Fangclub flavour, King promises “a really raw and powerful, rockin’ record.” From skipping college to the major leagues, 2017 will be the year where these three friends take on the world. Join the Fangclub - that tribe of the geeks and the outsiders, the only punks in town.