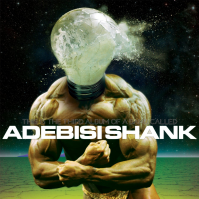 This Is The Third Album of a Band Called Adebisi Shank

It's the sound of hashtag winning. It's the sound of musclemen with lightbulb heads that rupture from their own perfection (see cover art). In a word, it's the sound of triumph... no matter the consequences. "We were trying to make something euphoric and huge, a universe of our own imagination that we could escape into," says bassist and masked man Vin. "Our inspirations were more cinematic and fantastical." This Is The Third Album of A Band Called Adebisi Shank bursts with pure rock anthems with undeniably danceable structures. Alongside the band's penchant for unusual instrumentation is their clever use of vocoder-effected vocals which seems to invite listeners to sing along with our robot overlords. In creating the album's imaginary universe, Adebisi Shank drew on a hodgepodge of inspirations, including ELO, Enya, Mike Oldfield, Pixar animated films, Crash Bandicoot video game and Game of Thrones. In 2013, the Wexford, Ireland trio consisting of guitarist/vocodist Lar Kaye, drummer Mick Roe and bassist Vin relocated to a secluded house in the wilds of county Wicklow, to avoid distractions and let their imaginations run wild. Writing and recording daily, the result is a multiverse of musical possibilities. Album opener "World In Harmony" begins deceptively like a dying 8-bit robot's version of Queen's "We Are The Champions" before erupting into a full-on anthem filled with stadium chants, digital voices, flavor-blasted guitar riffs, chirping synths and pounding rhythms. Elsewhere, "Mazel Tov" portrays a strangely brave new world wherein early 90s digital funk dance pop meets contemporary indie rock to produce a stompingly catchy tune. Likewise, "Turnaround" is led by a cheery synth melody reminiscent of late-80s pop, while aggressive rhythms and chopping guitars pigpile on top. First single Big Unit posted by numerous notable outlets and gained 20k soundcloud plays within a few days of post.