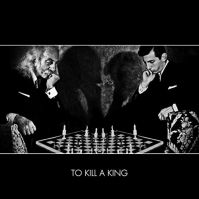 Xtra Mile Recordings is delighted to present the self-titled new album from the UK's best-kept secret: the ambitious and epic, To Kill A King. To Kill A King is a statement record. The reason it’s self-titled is to underline the fact that this is a new start. This is the band’s Year Zero. Anything is possible. The people who wrote the first album have changed so much, says singer Ralph Pellymounter. Their self-titled new album is the sound of a band hitting the peak of their powers. It’s the sort of record that could only be made now, an album where stadium-sized choruses, artful dynamism and sonic experimentalism slide seamlessly together. It will place the quintet firmly in the lineage of British guitar bands, such as Foals, the Maccabees and Bombay Bicycle Club, who make imaginative, exciting indie-rock. Like those groups, To Kill A King make music with no straitjacket on, a heady blend of youthful exuberance and spirited independence leading the way.