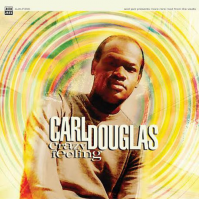 Mention the name Carl Douglas and the global chart topper â€œKung Fu Fightingâ€ immediately springs to mind. But back in the mid-late 1960s, the Jamaican singer fronted a succession of soul and R&B bands in Swinging London, starting with The Charmers and culminating with the highly revered Big Stampede. From late 1965 through to early 1967 Douglas cut nearly a dozen unreleased tracks plus a brace of singles, all mod/dance floor classics and collected together for the first time, by Acid Jazz Records, on the compilation you hold in your hands. Part of the ongoing Rare Mod series, it includes soul staples by Otis Redding- Mr Pitiful, Naomi Nevilleâ€™s Pain In My Heart, and Wilson Pickettâ€™s In the Midnight Hour , plus Carl Douglas originals â€“ Going Out of My Mind, Why Hurt and You Are the One I Love. These gritty, raw recordings comprise the majority of the tracks on this LP and offer a rare glimpse of Douglasâ€™ burgeoning talent. Carlâ€™s later, and more polished recordings, featuring top session players, guitarist Big Jim Sullivan, organist Harry Stoneham and bass player John Paul Jones (Led Zep) among others, provide the instrumental backing on the singerâ€™s finest outing â€“ the frantic, infectious soul number Crazy Feeling, the title of this release.