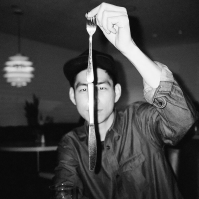 Its been six years since Nosaj Thing, the producer born Jason Chung, appeared among the vanguard of Low End Theory-affiliated producers from Los Angeles. His debut LP Drift, a sleek and futuristic record shot through with a sense of melancholy, was hailed as a landmark record for the beat scene, both embodying its aesthetic and transcending it with its focus on mood, texture on tone as much as on beats. Pitchfork called it gorgeously haunted, and Resident Advisor said it exists in its own dimension. If Drift was an impressive full-length debut, then Home, its 2013 follow-up and Nosaj Things first record for Innovative Leisure, consolidated that potential. Now, Fated is the sound of an artist whose sound has had time to mature. By stripping away anything he didnt deem strictly necessary, Chung harnessed a sound notable for its directness and emotional potency. Guest appearances are rare, save for vocals from Chicago rap phenomenon Chance The Rapper on Cold Stares, his unusually grave cadence deepening the paranoia of the already tense track, and Whoarei on Dont Mind Me.