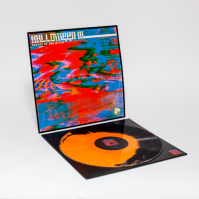 Death Waltz Recording Company is proud to return another previous release to its ranks a true classic of horror cinema scoring, with John Carpenter and Alan Howarth's score to HALLOWEEN III: SEASON OF THE WITCH. Bravely dumping the character of Michael Myers, the film instead looked at the concept of Halloween itself as a subject, with a mystery involving an Irish toymaker, three gruesome masks, and a chunk of Stonehenge. Eviscerated on release, it's now been re-evaluated as an underrated picture, not least because of Carpenter and Howarth's score.

Whilst it left the original themes at home, HALLOWEEN III still has a plentiful array of musical delights to scare the living daylights out of you. The main title has a palpable sense of dread, with low droning synths providing a backdrop for high-pitched lines representing a television signal. Edged notes along with a foreboding rhythm provide high tension along with stabbing wild synths, while a certain piece of driving music gives a sense of fate dragging you to a very bloody and nasty death. And then there's the Silver Shamrock theme. Remember kids, it's almost time – don't miss HALLOWEEN III – and don't forget to wear your masks.