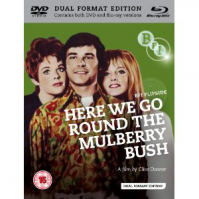 HERE WE GO ROUND THE MULBERRY

Clive Donner's (The Caretaker) modish and glossy swinging Sixties comedy follows the sexual exploits of irrepressible teenager Jamie (Barry Evans) who is full of adolescent energy, obsessed by sex and determined to lose his virginity.

Based on the book by respected British author and journalist Hunter Davies (The Beatles authorized biography), and with music by The Spencer Davies Group and Traffic, Here We Go Round The Mulberry Bush caused a considerable stir when first released due to its taboo-busting portrayal of permissive 60s society and is now rightly regarded as a definitive British coming-of-age film. Unavailable in any format since its initial theatrical run, this lost cult classic now receives its home video premier, in High-definition.