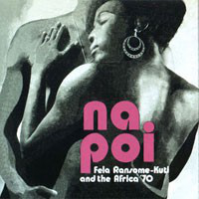 This album is somewhat of an anomaly for Fela Kuti. Accompanied as always by the Africa '70 band, Kuti temporarily abandons his tradition of one song extending over an entire LP side -- although he hasn't strayed too far from form -- as the A-side track extends over basically one and a half sides with the shorter funky rave "You No Go Die.....Unless" completing the B-side. In addition to that slight variance, the structure of Kuti's delivery as well as the explicitly sexual intonation in the subject matter of "Na Poi" stray from tradition. The title song has somewhat of a history in that it was recorded and issued twice before. The first version from 1972 has not been reissued domestically; however, Yellow Fever (1976) updated the track, which carried the apt moniker "Na Poi '75." The following year the composition was revisited to comprise the lengthy version which is spread over three quarters of this disc. In essence, the track is a sexual guide set to music. As such, it features both spoken narration as well as sung lyrics. "Na Poi"'s rhythms churn and grind through several notable movements -- including a spirited percussion section and several tight horn arrangements. These hark back to the same type of perpetual funk that became the cornerstone of Parliament and Funkadelic. Initially, the repercussions of such blatant sexuality resulted in the track being banned by the Nigerian Broadcasting Company -- although when the song was reissued in 1975 it snuck back on the air as the new version had an ever so slightly different name. "You No Go Die.....Unless" is much in the same spirit as James Brown's hard-driven funk musings. From Kuti's impassioned vocals to the upbeat syncopation of the rhythm, this track contains many obvious parallels between the mid-'70s stateside funk movement and that of concurrently popular African music. The incorporation of the Africa '70 horn section -- which is heavily featured during the bridges -- also provides a much thicker punctuation to Kuti's vocals. Lyrically, the song deals with the urban sprawl that was beginning to occur in Lagos -- in many ways a social observation on par with Marvin Gaye's "Inner City Blues" or Stevie Wonder's "Living for the City."