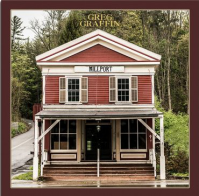 Millport is a country rock album, a solo outing for Bad Religion frontman, Greg Graffin. The players on this album include several esteemed cohorts from the LA punk scene including Social Distortion members Jonny ‘Two Bags’ Wickersham, Brent Harding and David Hidalgo, with Bad Religion co-founder Brett Gurewitz handling the producing. This album represents three distinct historical trends that came together in the span of only 10 days during recording at Studios 606 and Big Bad Sound in April of 2016. The most obvious one is the musicians themselves. The rhythm section is composed of players from Social Distortion. 36 years ago, Bad Religion and Social Distortion shared a stage in Santa Ana, California. Well, it wasn’t really a stage, it was an abandoned warehouse made into a punk concert / party place. That was my first concert, as the singer / songwriter in Bad Religion. Our styles over the years diverged, but one consistent element remained – our love of American Folk Rock and Old-Time music continued to grow. The second root apparent on this album is that of the sound and musicianship itself. No mere hacks, these musicians are masters. Vintage wood, having been crafted into musical instruments, produces the sound of history when played by virtuosos such as those collected here. An old guitar, a vintage fiddle, drums and bass, clawhammer banjo, and a combo of electric guitar and tubed amplifier, create a sound that can only be described as classic. When you add the beautiful harmonies of these most excellent background singers, there is no doubt that this music comes from a deep-rooted expression of American experience. The final historical root is a personal one. The people who introduced me to Old-Time music are now old-timers themselves. My family roots go back to Indiana and Wisconsin. The Indiana folks sang a-Capella in the old country chapel at my Grandma’s funeral. Her children taught me to sing and the songs they chose came from the 30s, 40s, 50s, and of course the folk revival tunes of the 1960s. This was the sound I brought forth to my own band starting in the 1980s. It’s the only kind of lyrical style I know. And hopefully this album will add another strong branch to my music. Thank you all for continuing to water the tree.