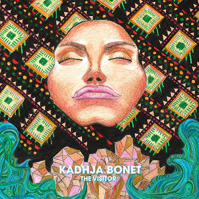 Kadhja Bonet's debut album 'The Visitor' opens with an awe you'd expect from the golden age of cinema, somewhere between Cinderella and Barbarella in its half-mythical atmosphere. Its curtains draw back to the ascendant fanfare of Earth Birth, with keys and choirs science-fictionally echoing down from deep space, as Kadhja - pronounced 'kodya' - invites us into a world not wholly our own, where past and future meet in a parallel, yet far lovelier, present. Even as this overture fades and Kadhja's voice velvetly emerges on Honeycomb, we still feel we're drifting into a timeless, unplaceable realm of Kadhja's own making. This very timelessness sends many a reviewer scrambling to find her nearest genre or closest musical cousins. They will blurb about classical, jazz, soul, folk, and even psychedelia, but ultimately fail to comfortably place her - this, all by Kadhja's design. For if she were'folk' - maybe poetically comparable to a Karen Dalton or a Sybille Baier - it would only be the folk of some future aeon, a thousand years hence. If her rich instrumentation of strings and wind strikes us as 'classic,' it's not because it harkens to any past era or vogue, but because Kadhja paints in a perennial imagery that could as much be now as then as any other time. Literary comparisons convey far more in Bonet's case. The mood of songs like 'The Visitor' and 'Gramma Honey', with their rehearsals of dusky and feeling-freighted tales, belong more to magical realism than any shelf or bin in the neighborhood record store.