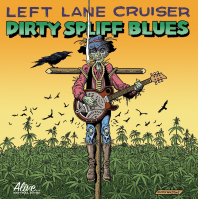 Speaker-shredding blues with no redemption from this voodoo hillbilly punk combo Classic Rock Blues Dirty Spliff Blues" is Left Lane Cruiser's 5th album for Alive Naturalsound, and the first one as a trio. The blues-driven rock n roll noise combo, now firmly headed by slide guitarist and lead vocalist Freddy J IV (aka Joe Evans), with Joe Bent on bass and skateboard (yes, he uses his skateboard as an instrument), and with Pete Dio on drums and assorted trash, delivers another primal high voltage take on the boogie and Hill Country blues. Specializing in a raw hillbilly punk-blues style that roars like a modal, tweaking chainsaw, Left Lane Cruiser began as a two-piece band comprised of Frederick Joe Evans IV on slide guitar and Brenn Beck on drums. The pair came out of Fort Wayne, Indiana but their sound had the swampy feel of North Mississippi hill country blues à la Junior Kimbrough and R.L. Burnside, with a good dose of snarling garage punk tossed into the mix. A self-released album, Gettin Down on It, was released on the group s own Hillgrass Bluebilly Records in 2006, and the following year, they signed to Alive Records. Bring Yo Ass to the Table appeared from the imprint in 2008, followed by All You Can Eat in 2009 and Junkyard Speed Ball in 2011. The song "Waynedale" from the All You Can Eat album was featured on episode 8, season 3 of the acclaimed television series "Breaking Bad". Teaming with James Leg, keyboardist with Black Diamond Heavies, the band released Painkillers in 2012, which also featured guest spots from bassist Jim Diamond and blues harpist Harmonica Shah. Rock Them Back to Hell! followed in 2013. Quotes : "A combination of reverence toward the progenitors of the blues and a spirit of pure enjoyment that is rare to find