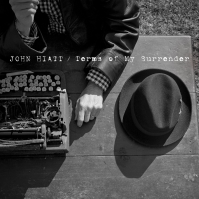 John Hiatt adds another chapter to his storied career with the release of Terms Of My Surrender. Produced by longtime collaborator and Combo member, Doug Lancio, Terms of My Surrender is rooted in the blues. It adds an exciting dynamic to one of America's finest singer-songwriters.

Hiatt and his band, The Combo, have gained a reputation for captivating crowds at their live shows as The Tennessean depicts: "He prowls the stage, delivering the bluesy stuff in a whiskey-burn howl, shouting the rock stuff and fronting a formidable band that can turn on a dime, from ballads to bombast." John Hiatt's career as a performer and songwriter has spanned more than 30 years and everyone from Bob Dylan, Eric Clapton, BB King, Bonnie Raitt and Iggy Pop has covered his work.