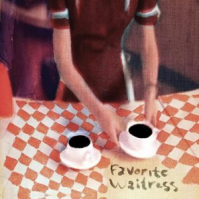 Taking it to another level whilst keeping alive the great Folk/Rock movement The Felice Brothers have delivered the album of their career. UK tour in June around release and again in August. The Felice Brothers kicked off in 2006. They did what any delinquent youths, lost in upstate New York with dim job prospects would do: become obsessed with traveling the world and playing extremely loud rock and roll. After settling on minor matters like who plays what (Ian Felice- vocals/guitar, James Felice- accordion/keys/vocals, Greg Farley- fiddle/vocals, Josh Rawson- bass/vocals. Recent addition David Estabrook- old friend/new drummer â€“ completes the current line up), the band procured instruments, cans of sardines and packed up tents and devoted their lives to studying the art of song craft. It was a long way to the top. The Felice Brothers' new album 'Favorite Waitress' marked the first time the band ever recorded in a proper studio. Produced by the band's longtime producer and collaborator Jeremy Backofen, the album is their most fully realized statement yet.