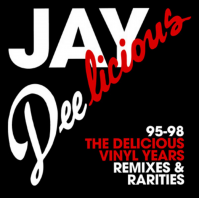 Jay Dee, aka J Dilla, emerged as a Hip Hop producer to be reckoned with in 1995 when his name was attached to the first single from The Pharcyde's eagerly anticipated sophomore album Labcabincalifornia . Drop the needle on his first Pharcyde production Runnin and you have the launch point of a producer's career that mesmerized, titillated and expanded the domes of Hip Hop fans for the next decade. Jay Deelicious: Originals, Remixes & Rarities documents Jay Dilla's early production on Delicious Vinyl. Working closely with The Pharcyde and Michael Mike Floss Ross, (Delicious Vinyl's founder), Jay Dee was instrumental in keeping The Pharcyde's second album as ear poppin' and bugged as their maiden classic Bizarre Ride To The Pharcyde , stepping up big time after the group parted ways with Bizarre producer J-Swift. In addition to original productions and remixes for Labcabin , Jay Dee skillfully worked with the label on incredible mixes for the Brand New Heavies, as well as unreleased remixes for former BNH singer, N'Dea Davenport. From the jazzed out Rhodes syncopation of Sometimes featuring Q-Tip, to the crazy cutting up of Got To Give It Up for Saturday Night featuring Mos Def, Jay Dee shows there s no tempo he can't freak on some otherworldly jazzed up funk tip.