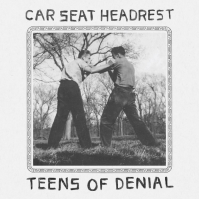 'Teens of Denial' is the thirteenth album in Car Seat Headrest's (aka 23-year-old Will Toledo) oeuvre, second on Matador, and first to be recorded in a proper studio with a full band and producer (Steve Fisk). On Denial, Toledo moves from bedroom pop to something approaching classic-rock grandeur and huge (if detailed and personal) narrative ambitions, with nods to the Cars, Pavement, Jonathan Richman, Wire, and William Onyeabor. By turns tender and caustic, empathetic and solipsistic, literary and vernacular, profound and profane, self-loathing and self-aggrandizing, he conjures a specifically 21st century mindset, a product of information overload, the loneliness it can foster, and the escape music can provide. At the heart of the album sits the 11:32 'Ballad of the Costa Concordia,' which has more musical ideas than most whole albums (and at that length, it uses them all). Horns, keyboards, and elegant instrumental interludes set off art-garage moments; vivid vocal harmonies follow punk frenzy. The selfish captain of the capsized cruise liner in the Mediterranean in 2013 becomes a metaphor for struggles of the individual in society, as experienced by one hungover young man on the verge of adulthood. 2LP - Double Vinyl with Download.