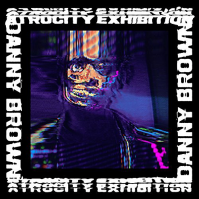 Detroit native and reigning ambassador of psychotropic outsider rap, Danny Brown releases his new album 'Atrocity Exhibition' via Warp. The album is a fresh and bold take on Brown's ruminations on life and the changes that have occurred - and those that didn't - following the ups and downs of career success. 'Atrocity Exhibition' makes for a thrilling third installment in the Danny Brown biopic, following the releases of his critically acclaimed and groundbreaking Fool's Gold albums 'XXX' and 'Old', sold out shows around the world including opening for Eminem at Wembley Stadium, and collaborations with an eclectic range of artists such as Ghostface Killah, Purity Ring, Rustie, Charlie XCX, E-40, the Avalanches and more. Brown's words can be found further amplified on this album with massive beats and production by frequent collaborator Paul White and additional contributions from Evian Christ, The Alchemist and Black Milk. Featured guest vocals come from label-mate Kelela, Cypress Hill member B-Real, Petite Noir and contributing to perhaps the most standout crew cut from recent memory on the song 'Really Doe', Kendrick Lamar, Ab-Soul and Earl Sweatshirt. Pairing his views on the irreconcilable differences between the future and the realities of the present, Danny Brown's 'Atrocity Exhibition' presents a sonic prism, with intricate use of story-telling and wordplay, showcasing his truly unique art form and pushing him past the boundaries of rap.