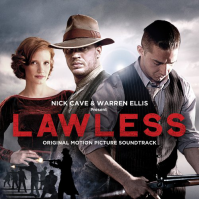 Original soundtrack to the 2012 motion picture.

The Lawless soundtrack includes original songs written by Nick Cave for the movie and performances by Country legends Willie Nelson and Emmylou Harris along with Grammy Award winner Ralph Stanley (O Brother, Where Art Thou) and Mark Lanegan from Screaming Trees and Queens of the Stone Age.

Best known for his work as a frontman of the critically acclaimed rock band, Nick Cave and the Bad Seeds, Nick Cave, along with fellow Bad Seed Warren Ellis, composed the soundtracks for The Proposition, The Assassination of Jesse James by the Coward Robert Ford and The Road.