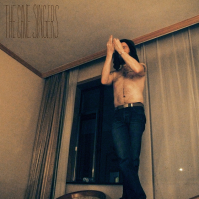 After two albums of perfecting their backwoods acoustic charm, go electric and eclectic on No Witch. The band enlisted producer â€” best known for working with Sunn 0))), and Black Mountainâ€” to help with the transformation, and itâ€™s a stunning one. The change might not be as shocking as, say, when went electric, but itâ€™s still something of a shock to hear the pastoral sound of the Cave Singers' past chopped down by plugged-in axes. To be fair, the band eases listeners into the transition, kicking off the album with two songs that would have been standouts on Invitation Songs or Welcome Joy. â€œGifts and the Raftâ€ is another showcase for Pete Quirk's rustic rasp, while â€œSwim Clubâ€ is aptly sweet and summery, rounded out by buoyant flutes that suggest the fuller sound the band explores later. â€œBlack Leafâ€ announces the bandâ€™s newfound rock with strutting riffs, a promise the Cave Singers make good on with the bluesy swagger and gospel singers of evoking both Cold War Kids and Beggars Banquet-era Rolling Stones. Of course, the bandâ€™s members played in rock bands before forming the Cave Singers, but itâ€™s to their credit No Witch's electrified sound has little to do with their previous work and that it sounds so natural, whether they chase the kinetic groove of "Clever Creatures" or get smoky and mystical on â€œOuter Realms.â€ That they sound equally at home on the gentle chamber folk of "Distant Sures" and the final, emphatic blast of "No Prosecution If We Bail" shows just how balanced and dynamic theyâ€™ve become, and what an assured album No Witch is.