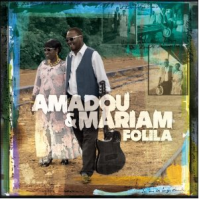 Over the course of the last several years, Amadou & Mariam’s music has become increasingly expansive, while remaining anchored by their trademark West African blues-rock. Manu Chao and Gorillaz front man Damon Albarn, in addition to their longtime producer/manager Marc-Antoine Moreau, have produced their recordings. In the same spirit of openness, the self-billed Blind Couple from Mali played a key role in Albarn’s multi-artist Africa Express concerts, and, more recently, performed informal L’Afrik C’est Chic jam sessions with various special guests in London and New York. Folila, their new album, due out April 10, 2012, on Because Music / Nonesuch Records, epitomizes their embrace of collaboration, with contributions by Santigold, TV on the Radio, Nick Zinner, Theophilus London, Bassekou Kouyate, and others.

Folila is produced by Marc-Antoine Moreau, who has worked with the duo for the entirety of their professional career. They recorded the basic tracks in New York and then re-recorded them in Bamako. For the final album, they chose tracks from both sessions. From the first few seconds of the opening track, “Dougou Badia,” the music is instantly recognizable, with Amadou’s signature electric guitar soon joined by Mariam’s distinctive voice. Santigold, who co-wrote the song with Mariam, joins her on vocals. Nick Zinner (Yeah Yeah Yeahs) complements Amadou on guitar on this and other tracks.

Other notable collaborations include “Wily Kataso,” featuring TV on the Radio, and “Nebe Miri,” with the hip-hop artist Theophilus London. Bassekou Kouyate, another Malian artist who has accomplished a remarkable crossover in the US, plays ngoni on several songs.

Folila is the first Amadou & Mariam studio album since Welcome to Mali, one of the most critically acclaimed recordings of 2009. An 8.4 review in Pitchfork said, “Inevitable is a good word for the stardom of Amadou & Mariam. People this amazingly talented and open to new sounds and ideas rarely remain obscure, especially after so many years honing their craft and building their catalog…This album is an affirmation of global connectivity and an emerging global culture that transcends and repurposes tradition as it sees fit—the sound of Mali merging with the world at large.” Indeed, the album won them their second Grammy nomination, a performance on “Late Night with Jimmy Fallon,” opening slots in stadium shows with Coldplay and U2, and plaudits from the New York Times, the Los Angeles Times, TIME, SPIN, Rolling Stone, FADER, and many others.