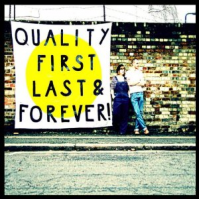 Trevor Moss & Hannah-Lou return with their new album Quality First, Last & Forever! this June on Heavenly Recordings, the follow up to their entrancing self-titled 2010 debut. Since then, they have continued to capture hearts across the nation with tours of village halls and tin tabernacles around the country. Produced by Richard Causon with Adem and Dan Carey lending their mixing and production talents, the new record is a defiant leap forward for Trevor & Hannah-Lou, who have penned a modern folk-pop masterpiece.