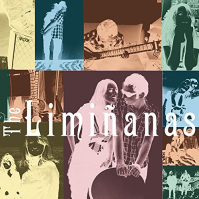 Getting their start in October of 2009, The Limiñanas are the brainchild of Lio and Marie Limiñana. Beginning as a home studio project the duo spent much time flipping through John Barry and Ennio Morricone LP's and books on Victorian era architecture, watching Noir films, and basking in the sun of southern France seeking inspiration. Their first single came by way of Chicago's venerable Hozac Records in March 2010, followed up by a single 7" release, “Je-ne-suis-pas-tres-drogue”, on the fledgling Trouble In Mind label in April 2010. It's been noted that their are traces of Serge Gainsbourg, Beck, Stereolab, Gospel, Yeh-Yeh, guitar fuzz freakouts, and Nugget's-era stompers in the Limiñanas music. All of which may be true, but Limiñanas sound is irreverent and singular.

This LP has a cinematic feel, with it's reoccurring themes, lyrics and instrumentals taking cues from influences like Gainsbourg’s great "Histoire de Melody Nelson" LP, as well as the 1960’s soundtracks they've become enamored with. Within the groovy and melancholy tracks, further listens (and a little quick translating) expose both the biographic and the fantastic in these songs. Partly the fictional adventures of "Cold Princess" and partly a musical document of Lio and Marie’s reflections on love, loss, and new beginnings. Keeping one foot firmly planted in the sounds of the past, and one foot in the now sounds of today, the Limiñanas debut self-titled LP lives up to the promise they've made on their initial releases and then some.