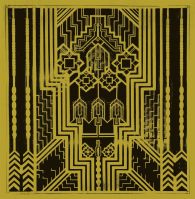 In Black And Gold

Emerging in a haze of demented riff science and booze-addled abandon, Hey Colossus have carved out a notable niche for themselves in the British underground's murkier quarters. They've dished out a formidable array of wax over the last decade, specialising in a primordial barrage of abject noise from overheated ampstacks. Yet for all the grit and gnarl of their output thus far, it's seemingly only been a warm-up for their latest opus, which sees their monstrous assault finely honed into an album as beguiling as it is bulldozing. 'In Black And Gold', their eighth album proper and first for Rocket Recordings, ushers in a new incarnation of Hey Colossus. Marrying malevolent attack to expansive celestial splendour, 'In Black And Gold' marks a point whereby Hey Colossus map out a sonic trajectory that expands on their trademark ornery overload. The songs herein may be leaner and more artful than the fearsome sound by which they made their name on albums like 2008's 'Project: Death' and the monstrous 2013 opus 'Cuckoo Live Life Like Cuckoo', but they remain possessed of the wrath both Stoogian and Stygian that fuels their noiserock transgression. Yet meanwhile, and with 2015 looming large, an evolutionary process has led to their maximalist tendencies being replaced by a sharp focus on space and restraint, not to mention a refreshing stylistic diversity, resulting in a strange aural alchemy. Here, they sound as comfortable tackling electronically-fried dub mantras like 'Lagos Atom' as they do the Cluster-esque lullaby of the opening 'Hold On'. Yet there's no shortage of primal rock action to be had on 'In Black And Gold'; on 'Sisters And Brothers' they summon up a swaggering, demented groove that sashays like a zombified Gun Club, whilst on the dramatic spaghetti-psych of the title-track a revelatory cinematic sprawl of sound sees The Bad Seeds and The 13th Floor Elevators engaged in a psychic duel in the noonday sun. The vital and Spinal Tap-approved 'fine line between clever and stupid' has been a location that this London-based tinnitus machine has made fine work of dwelling on for the duration of their life thus far. Yet with 'In Black And Gold', in a laudable leap of faith, they've stepped beyond, and the result is both vicious and visionary. These unpretentious underworld overlords have emerged from the shadows to create an avant-garage pièce de résistance, and moreover it turns out that the sunlight suits them better than they ever realised.