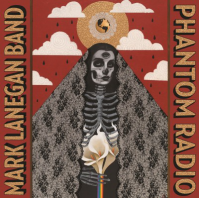 Lanegan's chief compositional tool on Phantom Radio was his phone – specifically an app called Funk Box. “I didn’t bother to hook up my 909 and 808 this time,” he says, “because the app had ’em. I’d write drum parts with it then add music with the synthesizer or the guitar.” The album grew organically from these synthetic roots, taking in Mark’s ongoing love of Krautrock and also an ’80s new wave show on Sirius satellite radio, his favoured aural companion as he drives around Los Angeles. “They have a few good shows but the ‘80s one in particular I like,” he says. “That’s the music that was happening when I started making music. And although the Trees drew on Nuggets psychedelia, 13th Floor Elevators and Love, we were actually listening to Echo And The Bunnymen, Rain Parade, the Gun Club. A lot of British post-punk. We loved that stuff. I just waited until I was in my late forties before I started ripping it off.”

Lanegan’s generous collaborative spirit sees him deliver an excellent co-write with British guitarist Duke Garwood, with whom he made last year’s dustbowl-desolate Black Pudding, and who now offers the music for I Am The Wolf, a Lanegan signature tune. Mark’s favourite song on the album, meanwhile, is Torn Red Heart, an intensely tender meditation for a broken heart that’s like The Velvet Underground’s Pale Blue Eyes orchestrated by Angelo Badalamenti. He also has a special mention for Floor Of The Ocean, which balances sheer catchiness with a deceptively bleak lyrical reflection on a life lived on the hard shoulder: “Clear eyes, can’t avoid the searchlight/Hope that they don’t find me/Find me where I’m lying.”