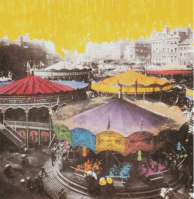 Fire Records re-press Neutral Milk Hotel s explosive 1996 debut On Avery Island . Jeff Mangum's songs are cryptic and crazed, his ideas fast and furious, and together they force the home-recording concept out of the basement and into a brave new world, a fuzzy masterpiece of experimental lo-fi recording. Full of rapid-fire wordplay with true and heartfelt experimentation, both ambitious and eclectic, it's not hard to see why this has been such an influential album. Part of the fabled Elephant 6 collective, Neutral Milk Hotel won over many a music critic with this cult classic. The band are recognized as one of the most influential alternative acts to come out of the mid-90s and sowed the seeds for everything from anti-folk to the likes of Arcade Fire, Caribou and even Franz Ferdinand.