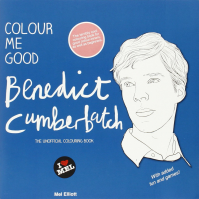 The newest in I Love Mel's pop culture colouring books is Colour Me Good Benedict Cumberbatch, and unofficial colouring book featuring line drawings of the star's best known roles on film and television. Cumberbatch has taken the world by storm in roles such as Sherlock Holmes on BBC's Sherlock, Khan in Star Trek: Into Darkness and as Julian Assange in The Fifth Estate. Now fans of the famed & actor's actor; can colour him in to their hearts' content!