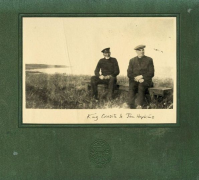 Diamond Mine, the critically acclaimed debut collaborative album from King Creosote & Jon Hopkins, is getting the deluxe version treatment on 16th April 2012. The original, Mercury-nominated album is augmented with extra material including all three tracks from the Honest Words EP, B-side Missionary and two brand new songs, Third Swan and Starboard Home.

Released a year ago to outstanding reviews, Diamond Mine has since become a much cherished album for an ever growing number of listeners. Featuring instrumental moments as affecting as the lyrical, the record consists of newly interpreted obscure delights picked out from 20 years of King Creosote’s treasure chest of a back catalogue. Intended to be heard as a single experience, Diamond Mine produces a near classical suite of emotion ranging from cracked despair to patched-up euphoria.

Third Swan: ‘The much revisited inspirational well of ructions, relationships and regrettable behaviour has very recently been replenished with a leaky bucket of political angst, due in no small part to James Robertson's fine novel "and the land lay still". "Third swan" is also a comment on how euphoria and despair sit side by side, with a few St. Andrews place names thrown in for good measure. To exist as the ugly duckling between two paragons of swan-like virtue is, no doubt, the metaphor that ties all of this together. In short, there was a lot swirling around my head in the dark weeks leading up to the end of 2011, and it had to end up on this, the penultimate page, of the Diamond Mine travelogue.’

Starboard Home: ‘As the good ship "Diamond Mine" ties up alongside our wave battered pier, the buffeting by wind and waves on our emotional voyage is replaced by the mournful cries of marsh birds and the welcoming voices of our loved ones, the ocean swell swapped for the comforting sight of the harbour lights.’