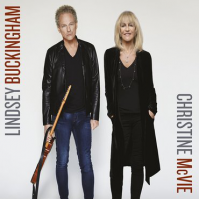 After more than 40 years together as members of Fleetwood Mac, Lindsey Buckingham and Christine McVie have joined together to record their first-ever album as a duo. Simply titled Lindsey Buckingham-Christine McVie, the 10-song album is released by East West Records. The pair recorded the LP at Village Studios in Los Angeles, where Fleetwood Mac also made several albums, including Tusk. Buckingham and McVie tapped bandmates Mick Fleetwood and John McVie to serve as the rhythm section for much of the album.