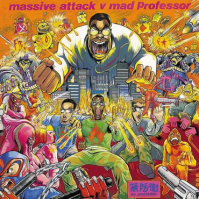 Mad Professor was contacted by Massive Attack after Protection was released to remix a song for a single. After the single was remixed, the band asked Mad Professor to listen to more of the album to explore the possibility of further remixes. The project then became a track by track remix of almost the entire album. Mad Professor heavily edited the original material to form a slow, pulsating mix in which the beat is emphasized, reverb is extensively used and the occasional vocals (many of the tracks are almost entirely instrumental) fade in-and-out in typical dub fashion, making a hypnotic, if slightly repetitive, mix. The result is arguably more textured than the original, but loses any sense of the jazzy feel of Protection.